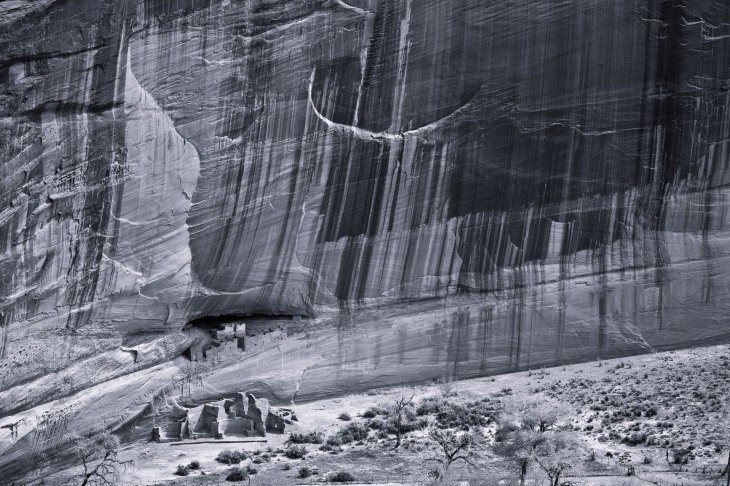 Aside from my “Alternate Evolution” series, posting in the future, I was strictly Black and White in the analog photography days for my creative work. Silver nitrate layers on film were the magic that produced a latent image on film which chemical processing converted into visible negative images of the scene photographed.

Since the early 2000’s few people work with it. The ease of digital and auto exposure in the software opened up the somewhat closed world of photography to mass consumption. With film it was imperative that the photographer understood the arcane technology of f-stops, shutter speeds, ISO/ASA film speed ratings, reciprocity affect, inverse square law, and highlight to shadow ratios, etc.

A generation later, only a few people hang on to, and a few have rediscovered the fun of film. Of those who do, a few still use the large format cameras and wet processing. The cost of a new high density large format digital sensor is still prohibitive, even for even the prosumer, when paired with a digital quality lens. View cameras and enlargers are still around and I would imagine the price for used equipment is high on the camera side and low on the enlarger side. I couldn’t give mine away and it went to the dump along with 3 El-Nikkor lenses and an Aristo Cold Light head.

I admire those with the dedication of sticking with film and have spent many hours lugging a heavy Bogen tripod and a Toyo D45M around the landscape. I then spent days in dark rooms striving to mold the image on the photographic paper into the image I held in my mind as I released the shutter. I just can’t abide the chemicals after spending over 20 years around the processors and darkrooms. I walked into an old fashioned camera store a couple of years ago (yes, there are still a few in existence). I gagged and was somewhat held back by the smell of the fix from their printing area. They had a small but successful lab processing c-prints and c-41 film. They carried B&W paper and chemicals translating to a higher number of people still doing it by hand than I would have imagined, for a rural town of about 100,000.

Black and White vision (or pre-visualization as it was taught by Ansel Adams) was a skill one had to develop over time to get the desired results. Additionally, dark room skills needed to be developed to produce fine quality prints. Of course there were those who just shipped everything off to the photo lab, but most serious photographers wouldn’t let someone else process their film or make their prints. It was too personal a process.

The Kettle – Bodie, CA. Example of an image from 4X5 film.

In the digital era we have the two S’s, sensors and software. I use Lightroom and have an older version Photoshop CS, seldom used. Today’s software is more powerful, and with more options, than most people are able to master. It took me a couple of years to get to where I could convert a color image to a B&W image in a way that pleased me. The image of Canyon de Chelly, above, is an example of a successful conversion.

In the past month I have visited three National Parks or Monuments as well as a Navajo Park (Monument Valley). Where most people are spending only enough time to drive to each of the attractions for 5 – 10 minutes, I am spending 3 – 10 days at each park and often hours at certain locations. I am out most every day shooting at least for 3 – 5 hours. At times the weather doesn’t co-operate, like at Canyonlands National Park, where it was blowing gusts, and dusts, up to 30 knots. This is apparently part of the normal spring weather. The undersides of my eyelids told me the dust was fine enough to crawl into my lenses and camera bodies, so the equipment stayed inside the Gadget.

Here, uncorrected, is a jpg of the RAW image of what I photographed at Green River Overlook in Canyonlands NP some days ago. On my first visit to the outlook there were at least 20 people walking around taking selfies on smart phones and a couple people with DSLR cameras and nice lenses. I was one of two people equipped with a tripod.

As I looked through the viewfinder I thought, “Well that’s nice…” somewhat underwhelmed. Then I noticed the White Rim Sandstone that shows along the edge of the drop offs. This is the 17th of 22 layers of the local geology that the river, and therefore incidental erosion, have carved out on the way to its present depth. The White Rim Sandstone layer is only about fifty feet thick but is extremely resistant to wear. This creates a Mesa layer with softer materials above and hard sandstone below fashioning the sheer walls you can see.

The white sandstone rim (actually called White Rim Sandstone – WR) reflects more light than the other materials, and with the sun in front and just off to the right of my camera’s view not only did I have a nice contrast between the rim and the rest of the scene, but the backlight meant that all the landforms facing me would be in shadow. Backlit shadows create the illusion of contrast and texture on the flat viewing surface of the photo. Add the few clouds in the sky, and the haze, and I felt it was a candidate for a good B&W image.

Later, I imported the images for the day and went immediately to the shot above. I tried 3 or 4 times to make it work in B&W but it just wouldn’t satisfy, so I moved on. I had another “detail” abstract image to work on that did come out to my satisfaction.

The next day was a “go to town” day to get connectivity and take care of personal business: taxes, insurance, hardware store, taxes, new boots, food, taxes, and to just look around Moab. I did purchase a great little horse hair hat band. The leather one on my hat was sweat soaked and when it dried it left round white salt spots where the band was stitched to the hat. They looked like demon eyes and I needed something a bit friendlier.

That night I opened Lightroom and the whole of the prior days shooting was there, but only in thumbnail and preview resolution. “The file named “X” is offline or missing,” showed on every frame. I immediately checked the disks using the filename, then searched by date. Gone. Plus, I had already formatted the memory card. Truly gone. Two days later I reshoot an image of a rock face from Deadhorse Point (the abstract detail shot) and then wait until the same time of day as before to go back to Green River Overlook, about 5:30 PM. 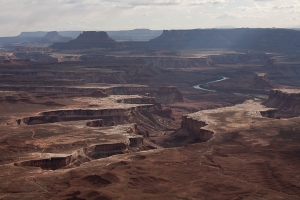 Jpg of the uncorrected RAW image.

Wow, what a difference. The wind was up a bit and sand was blowing across the canyons off in the far mid-distance on the right. Clouds were dropping virga in the upper left. To top it all, there was a well-defined set of cumulus clouds. I took advantage of the conditions and made a number of different framings and exposures.

After dinner I dared to import the new images. As a caution I rebooted before I wiped the memory card, all the images were still present. I went to work. It took me about 15 minutes to come up with a final on the image, so I exported and moved on. After working on a few others from that day it was getting late but I took another look at the Green River Overlook shot. Yeah, nope, it just wasn’t right. I spent the next 45 minutes fine tuning with brushes on the cliff areas in the lower half, the graduated filter on the upper half of the background, a lot of local contrast and exposure adjustments, tweaking the color layers in B&W, and playing with the tone curve and brightness. I hoped to emphasize the 1500 foot (500 Meter) drop from where the camera is to the WS layer and the additional 1500 foot drop to the water of the Green River. I concentrated on atmosphere, the feeling of depth, detail, and tonal balance. Now it was perfect and I sent it to my export folder. 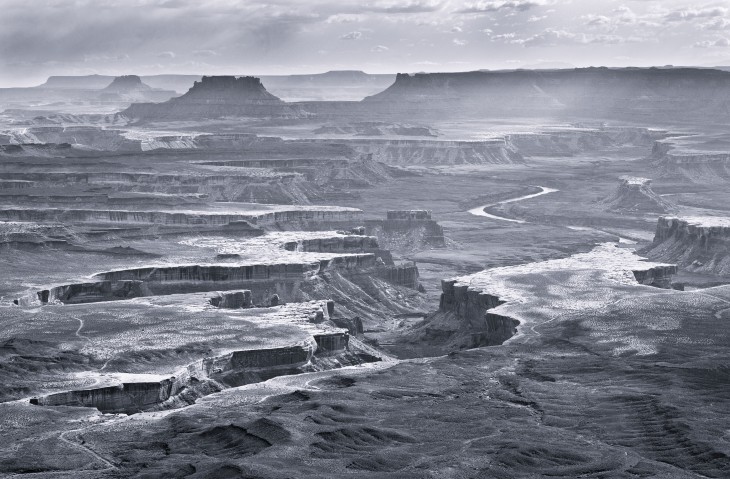 I don’t compare images with the other people regardless of their camera quality. Their plans normally prohibit it, usually including family commitments and other destinations over the short term. In addition, I don’t think most people are attempting to be creative with their photography, even those with DSLR’s and high end lenses. You can tell this by watching for a few minutes. If they just point and shoot, and spend only a few quick minutes at a site, they are only taking snapshots. Last, few would care what I shoot, so there is little to learn.

This is something I would have put on my walls back when I actually printed my own images. This image proves the beauty that can be extracted from an image when you extract its color.