Listening to: Le Sacre du Printemp (The Rights of Spring), Igor Stravinsky. This ballet music actually caused riots in the concert hall when first performed. It dragged the music world into modernism, just as Picasso did for painting. In the US it was Photographer Edward Steiglitz (later to marry Georgia O’Keefe) to bring Modernism to the American consciousness at the Armory Show. There was a segment on “Radio Lab” a couple of years ago about the riot incident at the first performance of the music.

Living in a city/town of enough people, even if in a rural area, you won’t see nature cycling. Blinded by the day to day, her ordinary progression is hidden in all but the trees and clouds. If you are lucky enough to see spring flowers, they were probably nursery raised and potted for a seasonal maintenance contract. What you don’t get to see is tiny life working its way through the surface of the soil merely hours after a light rain. You don’t see the grasses grow from 1 or 2 inches height one day to 4 or 5 inches the next, and you don’t see the buds appear at the twig tips of the trees. Their obviousness isn’t apparent until the blossoms and leaves begin to crowd the hollows created by the previous year’s leaf fall.

I began my galavant in January and having spent the first 8 weeks in an area of mostly Creosote, some unidentified flora, and a few cacti, I wasn’t really treated to any bits-o-the-bloom there until early March when there was a short, light rain. The rain wasn’t more than a friendly wet dusting of the earth with obese drops. It was never enough of a rain to require formal rainwear, but was sufficient to dampen the earth without mudding. The clouds sped away as fast as they had come, both events bracketed by warm sunshine and a breeze. An hour after the clouds set off to the north-west, an anomaly, the ground had dried and even the odor of rain in the ground had evaporated. 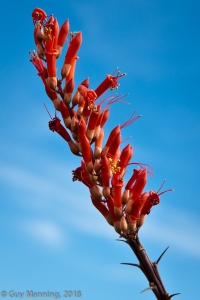 Two days later I wanted to explore another camping area run by BLM on the Senator Wash Reservoir. The area was hilly and choked with more Creosote and unidentified flora. Taking a “long-cut” out of the wash I chanced on an Ocotillo, in bloom. I would occasionally find an Ocotillo alone on the side of a ridge. But they had all been in the thorny annoyance stage with no active buds or blossoms.

Ocotillo are not a cacti but a woody shrub. Their stalks can be almost chartreuse in color, and during a wet period will grow leaves at the base of the thorns. I was able to see this up close in the week I spent in the Sonora Desert without a camera. I will likely spend time in the Sonora this coming winter. Regardless, close inspection of an Ocotillo earns you sharp rewards.

One of my interests in the Ocotillo blossoms was as a food source. The dried blossoms can be infused into a tea. I later read that the blossoms will excrete glucose which crystalizes as a sweet clear nodule on the blossoms, these I didn’t see. The blossoms may be eaten directly or stored for later. I read of no medicinal use. I did try eating a blossom, it was mild but uneventful.

This past week I have spent time at the Lee Metcalf national Wildlife Refuge, near Stevensville, MT. While hunting for the not-so-illusive golden dragonfly below I noted a couple of small clear drops hanging off what I believe was Bunch Wheat Grass buds along one of the paths. Recalling the Ocotillo, and me being me, I tasted it. My guess is it was glucose, quite sweet and sticky. I knew that glucose was a byproduct of photosynthesis but I didn’t imagine it being excreted by the grasses. To get any quantity would be a chore, I only saw it on a couple flower heads. 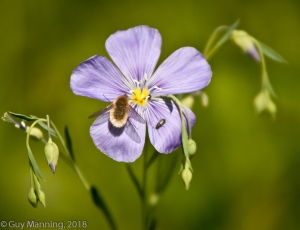 I am interested in all food sources that the land serves up, I have been sampling as I go. It is an extension of my interest in what knowledge disappeared when the Spanish and other Europeans systematically de-cultured the Americas. Spaniards, some conquistadors (Bernal Dias del Castillo, Pedro de Cieza de Leon), did write about their experiences or the process of conquest from a first party ethnographic view. Many of these authors (in translation and available at archive.org) give the reader glimpses of how the aboriginals (American Indians) lived and what they could accomplish without the benefit of iron and gunpowder. The problem is that most of the authors never looked into the how and why of Indian practices, so we are left with no knowledge of processes and procedures. As a result academics and amateurs have struggled to learn what is known today as “Ancient” or “Traditional Skills.” The question left over is, “What is it that we don’t know? “

There have been flowers blooming everywhere I have been. Many of them are almost undetectable they are so small. Most of the blossoms in the desert have been from ground shrubs growing close to the surface up to maybe 4 feet high. The large majority of these had blossoms that were tiny, less than ¼ inch in size, think Babies Breath. On some shrubs the leaves are covered in fine fuzz. The fuzz helps retain moisture by creating a thermal blanket, cooling the leaves in the hot climates. Others had very thick and spongy leaves, similar to a succulent, though the skin on the leaves was quite tough almost leathery.

The coloration of the plant life in the deserts was mostly muted, subdued tones of greys, greens, yellows, browns, red, and blacks. The only bright colors were blossoms. The most brilliant were the Claret Cup Cactus (Kingcup cactus, Mojave Mound Cactus). With their yellow stigma on the pistil and multiple anther on the stamen. 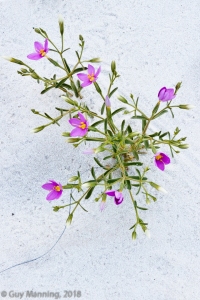 Possible member of the Geranium family growing in the gypsum sands of White Sands national Monument.